Senior Australian of the Year Nominee

Filed under Uncategorized {no comments} 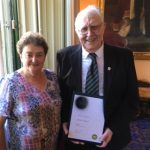 John with his Award

Congratulations to John Ward for his nomination as Senior Tasmanian for the  Australian of the Year Awards. John is a familiar face at our meetings and BBQs as a Friend of Rotary. He was nominated by member Glenyse Russell for his work with the Grandparents Caring for Grandchildren Network which he set up over 20 years ago to offer much needed support to these wonderful carers. John and his wife raised five grandchildren themselves.  An award ceremony was held at Government House  last Friday.

Theme SWIFT by Satish Gandham, a product of SwiftThemes.Com Copyright © 2021 Rotary Club of Moonah | Entries (RSS) and Comments (RSS) powered by WordPress [Back to top ↑ ]