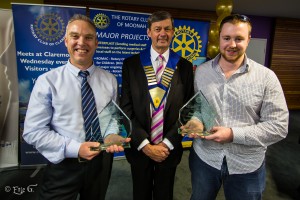 The best of  Glenorchy’s employees, apprentices, and trainees were recognised for their achievements at an awards ceremony held at the Glenorchy Civic Centre on Wednesday  30th of October, 2013.

Runner up in the Employee Section was Damien Arnol from William Adams Pty. Ltd.

This is the second year that these awards have been held, and this year we recognised the efforts of Employees as well as Apprentices and Trainees.

The awards are organised by the three Rotary Clubs in the Glenorchy Municipality – Claremont, Glenorchy and Moonah, The Moonah and Glenorchy Business Association, and Glenorchy City Council.

The intent of the awards is to recognise excellence within individual businesses and the general community and also to reinforce the “Do it once- do it well” theme of the program.

Award Recipients and their Employer Representatives at the Award presentation

A large crowd filled the Glenorchy Civic Centre for the Award Presentation.

Photos From the Award Presentation

Photos of Award Nominees, Employer Representatives, and Family Groups are available on a Facebook album.

Theme SWIFT by Satish Gandham, a product of SwiftThemes.Com Copyright © 2013 Rotary Club of Moonah | Entries (RSS) and Comments (RSS) powered by WordPress [Back to top ↑ ]